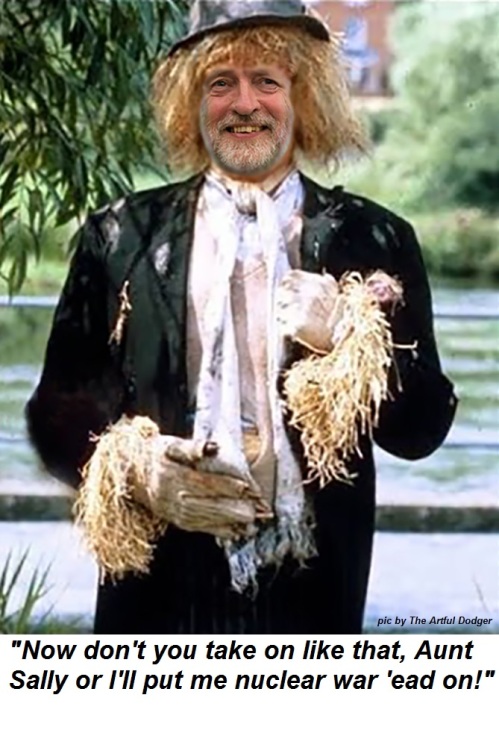 I’m a Syrian freedom fighter battling the Daesh hoardes in the north of our country. Although we have made some inroads with the help of western air strikes and have driven our foes from one or two small towns, the terrorists still have control of large areas and are subjecting our people to the most barbaric treatment. Beheadings, rape, the summary execution of homosexuals and child abduction is commonplace.

If Labour win the next election, can I and my comrades-in-arms rely on your government for continued support in our struggle to save this country from extremism and from the impending terrible threat of coming under the yolk of sharia law?

I’m afraid not as I don’t believe in armed conflict under any circumstances. However, if we do manage to get in at the next election, I will make the pledge to send you and your comrades some nice warm woollies for when it gets cold at night and some lovely camomile tea to calm your nerves when you come under fire from ISIS. You could even invite one of  two of their leaders over to your camp for a soothing cup or two. Why, I shouldn’t be at all surprised if that’s not all it takes to make them see sense and withdraw their forces. Especially if you’ve got some lovely shortbread fingers to share with them. I’ll make sure we send a tin or two just in case.

I hope you find this reassuring my friend. Keep in touch and don’t forget to wrap up warm at night.

Editor’s Note: The League of Mental Men have moved to here:

As a lifelong Labour Party supporter and socialist, can I just say that Jeremy Corbyn is an extremist buffoon who has about as much chance of being elected as I have of being voted “WordPress Family Member of The Year”.

We are talking here about a man who wants to build and launch nuclear submarines at astronomic expense to the taxpayer but without any missiles on board. He also believes the way forward with the murderous, Daesh, is to sit down and talk things through over a nice cup of tea and a plate of macaroons.

Can you see where I’m coming from on this one folks? The bloke’s certifiable in my view. It’s Trumpism in a cloth fucking cap!

Controversial Labour Party leader, Jeremy Corbyn, was in more hot water last night after a woman from Penge in South East London, made the claim that he climbed onto her roof and deliberately bent her TV aerial while she and her husband were enjoying an afternoon in front of the television.

Mrs Mary Tracy, 50, told reporters: “My husband and I were watching a repeat of Pride And Prejudice on UK Gold when the picture went a bit funny. At about the same time, we heard scuffling noises which sounded like somebody on our roof. We both went out to take a look and spotted Jeremy Corbyn bending our aerial. My husband shouted at him and asked him what he was playing at, but he took no notice and just carried on. He bent one of the antennae almost in half

“When he came down the ladder he looked wild-eyed and his clothing was disheveled. I’m pretty certain he’d been drinking. My husband was going to hit him but I told him to just leave it and that he wasn’t worth it.”

Corbyn, last night strongly denied the incident took place; telling reporters: “I absolutely refute this lady’s allegation. I have never bent anyone’s aerial and have no plans to do so in the future. Anyway, I couldn’t have done it as I was round Ken Livingstone’s house watching  the Argentinian general election on his plasma screen.”

If these allegations prove to be true, it will be the second time the left-wing leader has been implicated in a tele communications-based controversy, following his conviction in 2001 for urinating over the Freeview box of a couple in Bow, East London, while they were trying to watch The World Darts Championships on Eurosport.

Labour Party leader, Jeremy Corbyn, last night labelled 1970’s cop shows like The Sweeney and The Professionals as ‘excessively violent and too confrontational”

In a Q&A session in this week’s Socialist Worker magazine, Corbyn slammed the popular TV series for their: ‘overly macho protagonists’ and for having ‘shouty and unsympathetic bosses with little or no regard for the feelings for their subordinates’.

“The way people like Cowley and Haskins spoke to their workers was nothing short of a disgrace,” he said. “No wonder the likes of Jack Regan and Bodie and Doyle treated crooks and terrorists in such an unfeeling and arbitrary manner. Perhaps if their superiors had been a little more understanding we wouldn’t have had Regan bursting into the bedrooms of armed robbers, roughly demanding that they get dressed while their girlfriends had to cover their bosoms with a sheet.

“As for Bodie and Doyle out of The Professionals, was it really necessary for them to drive their car into piles of cardboard boxes in alleyways? Did they not stop to consider there could have been homeless victims of the Thatcher government seeking shelter inside them?

“In my view, PC Plod out of Noddy and Big Ears had the right idea. His portly frame and cheery demeanour would have been more than sufficient to deter any would-be bank robber or crazed, AK7-wielding fundamentalist, from being a silly billy”.

Corbyn’s criticism of TV police officers and members of the security services comes just two weeks after he condemned PC George Dixon of Dock Green, for threatening to clip a young, East London tough round the ear after spotting him holding the owner of a jeweller’s shop at gunpoint in 1965.

Tagged as Jeremy Corbyn, the league of mental men, The Professionals, The Sweeney

Leader Of The Opposition, Jeremy Corbyn, has announced that he will attempt to make amends for his refusal to sing the national anthem at The Battle of Britain commemoration ceremony by massaging The Queen’s tits when he is sworn in as a member of the Privy Council later today.

Corbyn told reporters: “I took a fair bit of stick for not singing along to the anthem a few weeks ago and realise it was pretty disrespectful of me, so I’ve decided to give Her Majesty’s tits a bit of a going over later to make up for it. Hopefully, this will get the press boys off my back for a while”.

If Corbyn fulfills his promise, it will be only the second time that a reigning monarch has received sexual favours in public since 1580, when Sir Walter Raleigh fingered Elizabeth The First to completion in Westminster Abbey after she gave him a knighthood for inventing potatoes.