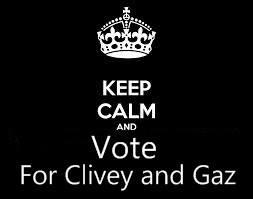 “Your blood on our safe hands”

With only hours until the polling stations open, we, at the Gratuitous Violence Party, would like to issue some last minute advice on why a vote for us would be a vote for a better Britain.

Here are just a few of the pledges we make to the British electorate if we have emerged victorious by this time tomorrow:

1. Every jewellers shop and diamond merchant the length and breadth of the land will be compelled by law (or force) to leave their doors and safes open after close of business.

2. The British police force will be disbanded by the beginning of next week at the latest.

3. Millwall FC’s football stadium and surrounding neighbourhood will be bombed into the stone age just hours after we enter Downing Street while West Ham FC will be awarded the Premier League title and the FA Cup, year in, year out, until we say stop.

4. All West London night clubs, strip joints and casinos will go into sole private ownership (ours)

5. Any WordPress blogger caught using ridiculously excessive superlatives to describe the decidedly average output of somebody who regularly does the same for their own tawdry, ill-conceived scribblings, will be dragged into the street and shot…twice.

6. There is no sixth thing.

Finally, we faithfully pledge that anybody that we suspect may not have voted for us will be given a free tour of Big Gaz’s Basement Of Pain-Wracked Regret. (tyre irons and electrical equipment available for hire on arrival). Relatives or next of kin will be expected to collect any remains at their own expense.

We therefore,  urge you most strongly to give us your support today friends. If you want to see a Britain where the cosh and the switchblade knife hold sway and where every citizen dives under the table, shaking like a shitting dog every time there’s a knock on the door, then the Gratuitous Violence Party is for you! So don’t delay, save yourself and your loved ones from a beating today!

Vote GVP for a bloodier Britain!…or else!

Clivey (Gaz didn’t have any hand in this one whatsoever. I shot him repeatedly through the head yesterday in a bitter feud over the Rich Tea biscuits. It’s what he would have wanted…trust me)

The last time my dad hit me was only a few days before he died. I cried very hard. He said I was a big fat loser and that North Korea would be lost if I were to become its Supreme Leader.

But then he died. At first I was sad, because my dead dad always knew what to do and I was afraid people might not love me as much as they loved him. So my first decision as Supreme Leader was to make a law requiring every North Korean to love me. Then my advisors told me that was not necessary, because the law already said I was very popular.

So I wondered if the law thought I was just as popular as my dad, who had just died. In my first week as Supreme Leader I decided to have an election. I figured if people thought I was so awesome they would all vote for me. Also, I didn’t have any competitors and the people were required by law to cast their vote. So all in all I liked my odds.

But then I figured it doesn’t make any sense to have an election with only one candidate. Plus I wanted to know if North Koreans love me as much as they loved my dead dad. That’s why during my first election the people could choose who they wanted as their Supreme Leader: Me or my dad, who had just died.

I won by a landslide.

There were some people that voted for my dead dad, but not many. Right before the election I had made a law forbidding people to vote for my dead dad. Political experts say that was a smart move on my end and that I reeled in a lot of ‘swingers’ that way.

I’m thinking of having another election one of these days. I’m in a winning mood and I like winning elections.

Your one and unly,

P.S.
Paris Hilton, Kim Kardashian, Pamela Anderson, Hulk Hogan, Fred Durst…A lot of people seem to get attention from making sex tapes. It’s a bit of a career boost apparently. I wonder if me and my wife should make one. She said she doesn’t want to, but I threatened to insist. Haven’t made up my mind yet.