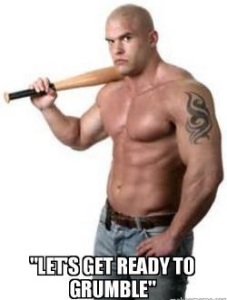 As someone who has always been interested in crafts; upcycling, crochet etc, I decided to join a small Facebook group a few weeks ago, consisting of a number of other people who share my interests, with a view to exchanging ideas and even buying and selling our work online.

Sadly, a man in the group keeps making inappropriate remarks about my physical appearance and I’m finding it terribly upsetting. I’m also worried that my partner will find out as he’s very short-tempered and I’m scared that he might go round and sort this chap out. The last thing I want is for anyone to get hurt, so please help if you can Danny as I’m at my wits end with worry over this one. Thank you x

I totally understand your desire to avoid any physical violence as a result of this one sweetheart, so I’ve traced the geezer through his IP address and gone round his house. As soon as he opened the door, I straightened him with a peach of a right hook to the jaw. I then dragged him to his feet and went to work downstairs, sickening him with a few big bombs to the solar plexus before putting him back on the deck with a right/left combination to the temple. At this point, his old woman came out and started shouting the odds and telling me to leave him. She was a big, ugly old sort and looked a lot like Desperate Dan so I told her to shut it or I’d serve her up too.

By now, the geezer was coming round so I stamped on his head, giving him the old 5mm tread. This seemed to quieten him down, so I gave him a few toe-enders to the kidneys to liven him up a bit. I could see the boy had had enough by now so I pulled out a Stanley blade and gave him a striping across his neck and chest before putting his lights out once and for all with a right cross to the chin.

Before I left, I told his missus that he was a nonce and a sleazy mug and that if he contacted you again I’d come round and finish what I’d started. I then torched his motor and drove back to the office.

I hope this sets your mind at rest princess. I always maintain that these little problems can be settled amicably with a bit of diplomacy and patience and with the minimum of unpleasantness.

All the very best sweetheart

PLEASE BE GENTLE. WE SATIRISTS CAN DISH IT OUT BUT WE CAN'T TAKE IT. Cancel reply